THIS THING CALLED LIFE: Neal Karlen on Prince in conversation with Danny Caine 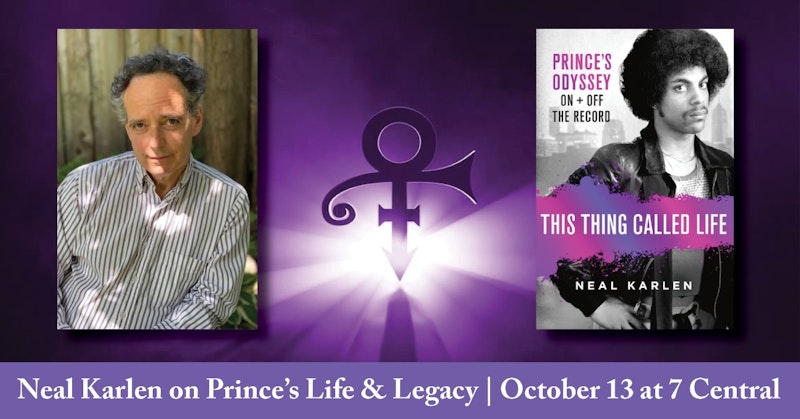 This is a virtual event. Sign up for free here.

We are gathered here today to hear Neal Karlen, the only journalist to interview Prince more than once, discuss his new book This Thing Called Life: Prince's Odyssey, On and Off the Record. He'll be in conversation with Danny Caine, Raven Book Store owner and Prince superfan. Signed books are available for order through ravenbookstore.com.

An unusual, remarkably detailed biography of one of the most iconic musicians of our times, by a reporter who did the only two long authorized interviews with Prince and became a lifelong friend.

This Thing Called Life subtly changes what we know about a massive star, one who relentlessly controlled his own image and career, and who everyone wanted to know.

Neal Karlen interviewed Prince for the artist's two Rolling Stone covers and, according to Prince's former fiancée Susannah Melvoin, was “the only reporter who made Prince sound like what he really sounded like." Indeed, Prince and Karlen had known each other years before, as two of the gang of Minneapolis boys who biked around the neighborhood and played basketball. Karlen says that not only can fans not understand Prince without understanding Minneapolis in the 70s, but that anyone who knew Prince only knew 15% of him: that was all he was willing to give, no matter how much he cared for them.

Going back to Prince Rogers Nelson's roots, including his contradictory and often tortured relationship with his father, This Thing Called Life explains the star as no biography has: a superstar who calls in the middle of the night to talk, who loved The Wire and could quote from every episode of The Office, frequented libraries, jammed spontaneously for local crowds (and fed everyone pancakes afterward), who was lonely but craved being alone. Readers will drive around Minneapolis with Prince in a convertible, talk about movies and music and life, and watch as he tries not to curse (instead dishing a healthy dose of "mamma jammas").

Neal Karlen writes regularly for The New York Times and is a member of the adjunct faculty of the University of Minnesota journalism school. His work has appeared in The New Yorker, Esquire, GQ, Elle, The Forward, Rolling Stone, Newsweek, and Olam, among other publications. He lives in Minneapolis, Minnesota.

This Thing Called Life: Prince's Odyssey, On and Off the Record (Hardcover)

A warm and surprisingly real-life biography, featuring never-before-seen photos, of one of rock’s greatest talents: Prince.