Help us tell the Raven's history! 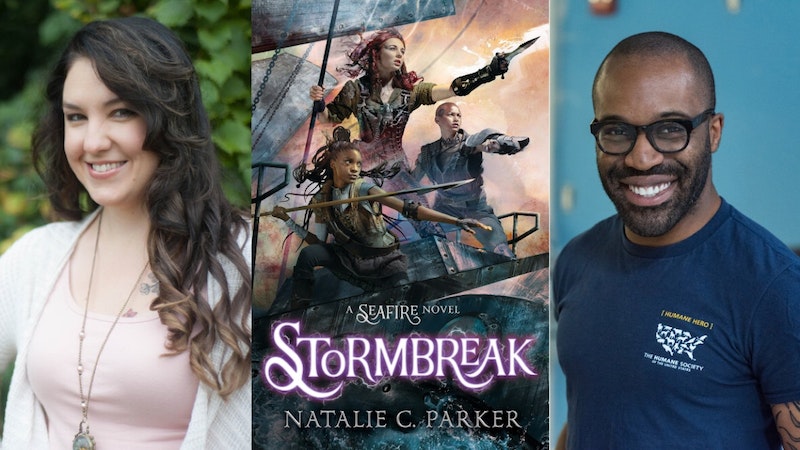 Natalie C. Parker launches the thrilling conclusion to her Seafire trilogy with special guest Tochi Onyebuchi! This one is not to miss!

This is a virtual event! Register and attend here! And Preorder a signed copy here; if you'd like a custom dedication, just write instructions in the order comments field!

In this epic conclusion to the Seafire trilogy, which Booklist called “Mad Max by way of Davy Jones,” Caledonia Styx will risk everything—her heart, her crew, and even her life—to defeat Lir and take back the Bullet Seas once and for all.

Aric Athair is dead. But the fight for the Bullet Seas is far from over. Caledonia’s nemesis, Lir—the one responsible for destroying her family—has seized control of the warlord’s army.

Caledonia and her crew have fled to Cloudbreak to prepare for an all-out war. And they are not the only ones. Rogue ships and even a few defecting Bullets show up to join their fight. But Lir always seems to be one step ahead of Caledonia, anticipating her every more as he secures the seas for himself.

With the fight growing desperate, Caledonia is forced to make an unlikely and unsteady alliance with a new enemy. It’s a gamble that could cost her everything, but with the fate of the seas in her hands, Caledonia will do whatever it takes to win the war.

Natalie C. Parker is the author and editor of several books for young adults among them the acclaimed Seafire trilogy. Her work has been included on the NPR Best Books list, the Indie Next List, and the TAYSHAS Reading List, and in Junior Library Guild selections. Natalie grew up in a navy family finding home in coastal cities from Virginia to Japan. Now, she lives with her wife on the Kansas prairie.

Tochi Onyebuchi is the author of Beasts Made of Night, its sequel Crown of Thunder, War Girls, and his adult fiction. debut Riot Baby, published by Tor.com in January 2020. He has graduated from Yale University, New York University’s Tisch School of the Arts, Columbia Law School, and L’institut d’études politiques with a Masters degree in Global Business Law.

His short fiction has appeared in Asimov's Science Fiction, Omenana, Black Enough: Stories of Being Young & Black in America, and elsewhere. His non-fiction has appeared in Uncanny Magazine, Nowhere Magazine, Tor.com and the Harvard Journal of African-American Public Policy. He is the winner of the Ilube Nommo Award for Best Speculative Fiction Novel by an African and has appeared in Locus Magazine's Recommended Reading list.

Born in Massachusetts and raised in Connecticut, Tochi is a consummate New Englander, preferring the way the tree leaves turn the color of fire on I-84 to mosquitoes and being able to boil eggs on pavement. He has worked in criminal justice, the tech industry, and immigration law, and prays every day for a new album from System of a Down.

In this epic conclusion to the Seafire trilogy, which Booklist called "Mad Max by way of Davy Jones," Caledonia Styx will risk everything--her heart, her crew, and even her life--to defeat Lir and take back the Bullet Seas once and for all.

The second book in a heart-stopping trilogy that follows the captain of an all-female ship hellbent on taking down a vicious warlord's powerful fleet, which Kirkus Reviews called "an immersive, adventurous pleasure that improves on the first book."

"One of the year's most anticipated new fantasies." --Entertainment Weekly

Winner of the 2020 New England Book Award for Fiction!

Beasts Made of Night (Hardcover)

"This compelling Nigerian-influenced fantasy has a wonderfully unique premise and lush, brilliant worldbuilding that will consume you until the last page."—Buzzfeed

"...Unforgettable in its darkness, inequality, and magic." —VOYA, Starred Review

Two sisters are torn apart by war and must fight their way back to each other in a futuristic, Black Panther-inspired Nigeria.

The year is 2172. Climate change and nuclear disasters have rendered much of earth unlivable. Only the lucky ones have escaped to space colonies in the sky.