Sarah Smarsh in conversation with Chuck Mead: SHE COME BY IT NATURAL 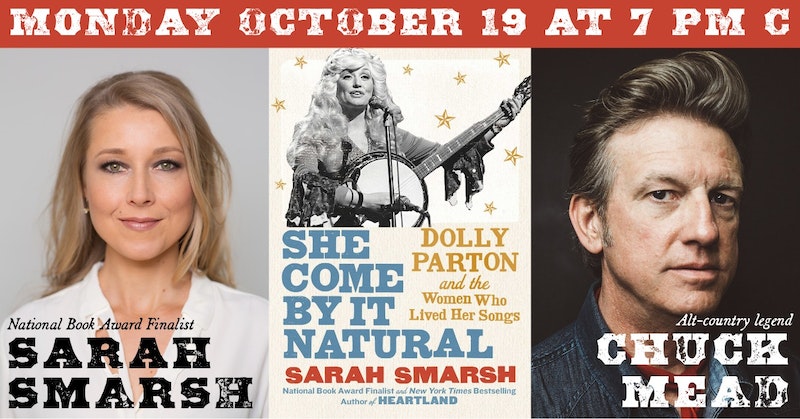 Sarah Smarsh will discuss her new book She Come By It Natural: Dolly Parton and the Women Who Lived Her Songs with Chuck Mead, founding member of legendary alt-country band BR549. An audience Q&A will follow the discussion. Signed copies of Sarah's book are available for preorder from the Raven Book Store.

The National Book Award finalist and New York Times bestselling author of Heartland focuses her laser-sharp insights on a working-class icon and one of the most unifying figures in American culture: Dolly Parton.

Growing up amid Kansas wheat fields and airplane factories, Sarah Smarsh witnessed firsthand the particular vulnerabilities—and strengths—of women in working poverty. Meanwhile, country songs by female artists played in the background, telling powerful stories about life, men, hard times, and surviving. In her family, she writes, “country music was foremost a language among women. It’s how we talked to each other in a place where feelings aren’t discussed.” And no one provided that language better than Dolly Parton.

Smarsh challenged a typically male vision of the rural working class with her first book, Heartland, starring the bold, hard-luck women who raised her. Now, in She Come By It Natural, originally published in a four-part series for The Journal of Roots Music, No Depression, Smarsh explores the overlooked contributions to social progress by such women—including those averse to the term “feminism”—as exemplified by Dolly Parton’s life and art.

Far beyond the recently resurrected “Jolene” or quintessential “9 to 5,” Parton’s songs for decades have validated women who go unheard: the poor woman, the pregnant teenager, the struggling mother disparaged as “trailer trash.” Parton’s broader career—from singing on the front porch of her family’s cabin in the Great Smoky Mountains to achieving stardom in Nashville and Hollywood, from “girl singer” managed by powerful men to leader of a self-made business and philanthropy empire—offers a springboard to examining the intersections of gender, class, and culture.

Infused with Smarsh’s trademark insight, intelligence, and humanity, She Come By It Natural is a sympathetic tribute to the icon Dolly Parton and—call it whatever you like—the organic feminism she embodies.

Sarah Smarsh is a Kansas-based journalist who has reported for The New York Times, The Guardian, and many other publications. Her first book, Heartland: A Memoir of Working Hard and Being Broke in the Richest Country on Earth, was a finalist for the National Book Award. A 2018 research fellow at Harvard University’s Shorenstein Center on Media, Politics and Public Policy, Smarsh is a frequent speaker and commentator on economic inequality.

This Kansas native, has been at the forefront of what has come to be known as Americana Music for the better part of 25 years. Perhaps best known for co-founding the famed ‘90s Alternative Country quintet, BR5-49, whos 7 albums garnered a CMA Award for Best International Touring Act and three Grammy nominations, helped build an indelible bridge between authentic American Roots music and millions of fans worldwide.

With a deep connection to Memphis and a burning desire to keep building musical bridges, Chuck packed up the band and took time out of his crazy schedule last summer to record his fourth solo album with Matt Ross-Spang (Margo Price/John Prine/Jason Isbell/Al Green) at legendary Sam Phillips Recording Studios, the result of which, ‘Close To Home’, was released June 21, 2019 on Plowboy Records.

She Come By It Natural: Dolly Parton and the Women Who Lived Her Songs (Hardcover)

The National Book Award finalist and New York Times bestselling author of Heartland focuses her laser-sharp insights on a working-class icon and one of the most unifying figures in American culture: Dolly Parton.