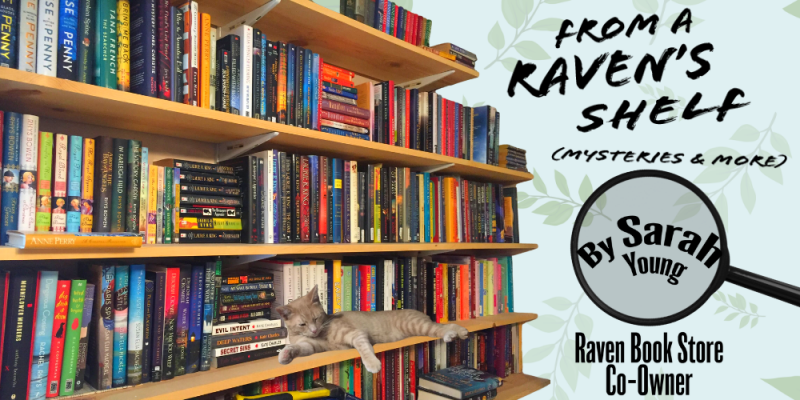 From a Raven's Shelf

Note: Scroll to the bottom of this article for a full list of all titles that have been mentioned!

Well, Happy 2023, everyone! I hope your holiday reading was joyous. Do you have reading resolutions for the new year? My resolutions remain fixated on the pile of books that tempt me unmercifully. I did some bookshelf reorganizing this month and pulled to the front several books that I want to tell you all about. My holiday reading has been a little eclectic and not as robust as I had hoped, but there are some good ones here.

If you are a fan of Dorothy Cannell and her hilarious Ellie Haskell series that began with The Thin Woman, you might enjoy Murder at Mullings with her new character Florence Norris. This series is now into three books; Peril in the Parish is the most recent. Think Downton Abbey crossed with Dorothy Sayers or Agatha Christie where we follow the adventures upstairs and downstairs in a 1930s English country house where Florence is the head housekeeper. The Stodmarsh family is stolidly and resolutely uncontroversial and undramatic for generations until the quiet, invalided Lady Stodmarsh dies (perhaps mysteriously), and Edward Stodmarsh falls into an ill-considered second marriage to a woman whose actions rock the ivy walls and dusted halls of the estate. These novels have a different character than The Thin Woman series; they are more classic-English-country-estate-mystery than the zany Ellie Haskell books. Atmospheric and descriptive, the first novel (Mullings) covers several years of backstory and traditions while setting up the relationships among the characters and the mystery itself.

If you like classic British mysteries, you might also be a reader of traditional cozies with a historical setting; check out Joyce St. Anthony’s Homefront News series that begins with Front Page Murder. This series is set in WWII in the small town of Progress, Pennsylvania, where Irene Ingram has taken over as editor-in-chief of the Progress Herald, while her father is reporting in the war zone. I started this series with the second book, Death on a Deadline, where Progress is preparing for a war bond drive at the county fair with a troop of several B-list actors headlining the drive. When actor Freddie Harrison ends up dead in the dunk tank, Irene investigates and discovers old hurts and scandals that reach even into the history of Progress. St. Anthony does a good job evoking the 1940s atmosphere, and I like Irene, who takes on the chauvinism of her profession as well as murder investigations. There was no trouble with reading the second in the series before the first. It just piqued my interest in the first book.

Turning to the darker side of the mystery genre, if you have been in the store this January you will see that my staff pick for this month is Blackwater Falls. This is a brand-new book and series from one of my favorite authors, Ausma Zehanat Khan. I discovered Khan several years ago, listening to an interview with her about The Unquiet Dead, the first book in her Rachel Getty/Esa Khattak series, which is one of my frequent recommendations in the store. Blackwater Falls introduces Detective Inaya Rahman, a new detective in the town of Blackwater Falls, Colorado. As a Muslim woman, she finds herself battling the White-male-dominated atmosphere of the department even as she strengthens her relationships with other female colleagues. As she does with her other books, Khan uses the mystery to explore the tension between her characters and their surrounding society and cultures. Inaya Rahman works to resolve the struggles that pit her profession against her religious and familial identity even as she seeks the murderer of young girls from immigrant communities.

Another in the darker camp is the mystery subscription this month: The Quarry Girls by Jess Lourey. Jess Lourey is carving out a giant space in the mystery/thriller genre and her work has lots of passionate followers. Set in 1977 in Minnesota, The Quarry Girls has been described as “true crime” disguised as fiction. It’s a dark, powerful coming of age story about three teenaged girls who are best friends, whose world goes completely sideways one summer as they discover their town has secrets, and the people they trusted are not what they always believed them to be. It is an intense thriller that will make you squirm a bit even as it compels you to continue reading. 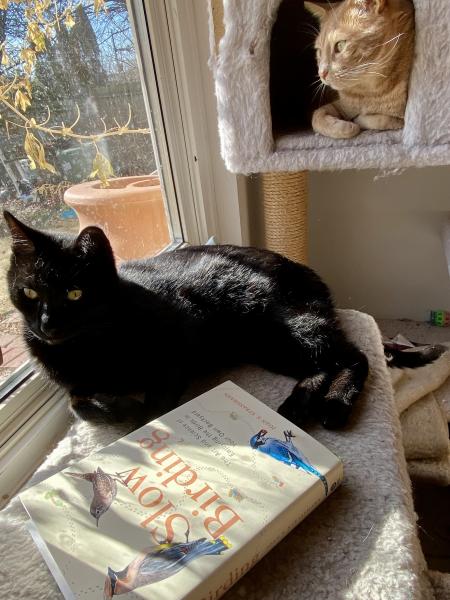 Well, let’s take a break from murder and mayhem and settle down in front of a window to enjoy the birds of our backyard. I have multiple feeders in my garden, and the cats and I spend hours enjoying the ordinary birds that brighten the dark winter months. Consequently, I rushed to get Slow Birding: The Art and Science of Enjoying Birds in Your Own Backyard by Joan E. Strassman, a book that celebrates the joys of the birds we encounter in our gardens on a regular basis. Strassman devotes individual chapters to the history and science of birds ubiquitous in our lives including the American Robin, Northern Flicker, Blue Jay, House Wren, and our winter friend, the Dark-Eyed Junco. She takes on the controversial histories of the House Sparrow and European Starling, acknowledging their difficulties as well as noting their fascinating behaviors. She waxes quite poetic about one of my favorite winter birds, the Snow Goose, which is not one in my own back garden but encountering great flocks of Snow Geese is a treasured winter experience. Each chapter ends with a series of activities tied to the watching of each bird that make this book one to share with younger members of your family. Sit down with a hot cocoa in front of your personal back garden feeders and enjoy some slow birding.

Let me end on a frivolously fun recommendation today: The Queen of Mystery Candy is Janet Evanovich, and the latest is Going Rogue: Rise and Shine Twenty-Nine in the phenomenally successful Stephanie Plum series. (I also recommend listening to the audiobook of any Evanovich book read by Lorelei King.) Filled with the usual freaks, geeks, murderers, and exploding cars, Going Rogue proves that Evanovich just keeps plugging along with a great combination of loveable (if somewhat unbelievable) characters. The mystery is usually less interesting than returning to see what Stephanie, Lula, Grandma Mazur, Morelli, and Ranger are up to this time. Spicing up the gang for this book are more scenes with Morelli’s crazy Grandma Bella, who has gone FTA (failure to appear) after setting fire to a neighbor’s garage. Is Stephanie really going to put the cuffs on Bella and risk getting “The Eye”? The more serious problem is that Connie Rosolli, the bail bonds office manager, has been kidnapped, and Stephanie has only twenty-four hours to meet the kidnappers’ demands.

Speaking of audiobooks, I’ve been an audiobook reader for years and several of my reads this month have been audio. I love listening to books while working around the house or driving. If you are an audiobook reader, I encourage you to investigate Libro.FM, an audiobook service where purchases benefit your local independent bookstore. If you are interested, Libro.Fm has a new year audio-book challenge for 2023. You can find the details here.

I already have a pile set for my next month’s reading. We shall see what works its way to the top.

ISBN: 9781448308637
Availability: This book is in stock at our warehouse and will be at the Raven within 3-5 Business Days, once they've shipped it to us.
This book cannot be returned. Make sure what you're ordering is exactly what you want.
Published: Severn House - November 1st, 2022

In this World War II-era historical mystery series debut by Joyce St. Anthony, small-town editor Irene Ingram has a nose for news and an eye for clues.

Death on a Deadline (A Homefront News Mystery #2) (Hardcover)

“Khan is a refreshing original, and The Unquiet Dead blazes what one hopes will be a new path guided by the author's keen understanding of the intersection of faith and core Muslim values, complex human nature and evil done by seemingly ordinary people.

The Quarry Girls: A Thriller (Paperback)

Killers hiding in plain sight. Small-town secrets. A girl who knows too much. From the Amazon Charts bestselling author of Unspeakable Things and Bloodline comes a nerve-twisting novel inspired by a shocking true crime.

Slow Birding: The Art and Science of Enjoying the Birds in Your Own Backyard  (Hardcover)

A one-of-a-kind guide to birding locally that encourages readers to slow down and notice the spectacular birds all around them.

Many birders travel far and wide to popular birding destinations to catch sight of rare or “exotic” birds. In Slow Birding, evolutionary biologist Joan E. Strassmann introduces readers to the joys of birding right where they are.

Monday mornings aren’t supposed to be fun, but they should be predictable.