Patricia Lockwood in conversation with Tommy Pico: NO ONE IS TALKING ABOUT THIS 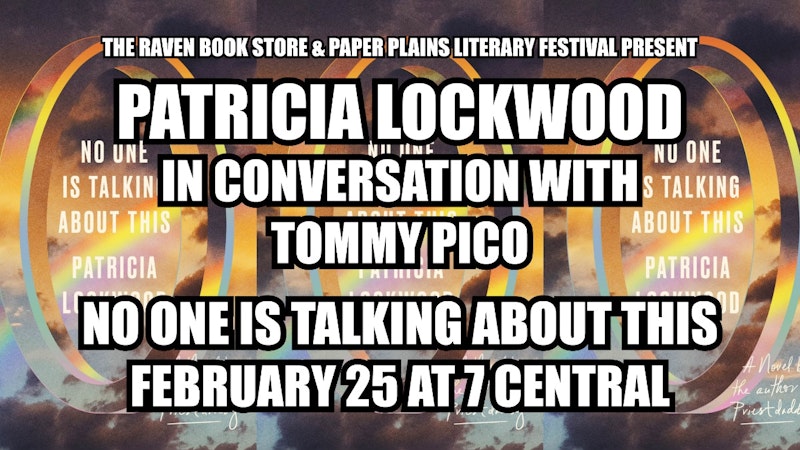 Note: this is a virtual event. Register and view the event here!

Join two of the funniest people on the Internet in celebration of Patricia Lockwood's truly astounding new novel No One Is Talking About This.

Trust us, this is a conversation not to be missed.

As this urgent, genre-defying book opens, a woman who has recently been elevated to prominence for her social media posts travels around the world to meet her adoring fans. She is overwhelmed by navigating the new language and etiquette of what she terms “the portal,” where she grapples with an unshakable conviction that a vast chorus of voices is now dictating her thoughts. When existential threats—from climate change and economic precariousness to the rise of an unnamed dictator and an epidemic of loneliness—begin to loom, she posts her way deeper into the portal’s void. An avalanche of images, details, and references accumulate to form a landscape that is post-sense, post-irony, post-everything. “Are we in hell?” the people of the portal ask themselves. “Are we all just going to keep doing this until we die?”

Suddenly, two texts from her mother pierce the fray: “Something has gone wrong,” and “How soon can you get here?” As real life and its stakes collide with the increasingly absurd antics of the portal, the woman confronts a world that seems to contain both an abundance of proof that there is goodness, empathy, and justice in the universe, and a deluge of evidence to the contrary.

Fragmentary and omniscient, incisive and sincere, No One Is Talking About This is at once a love letter to the endless scroll and a profound, modern meditation on love, language, and human connection from a singular voice in American literature.

Patricia Lockwood was born in Fort Wayne, Indiana and raised in all the worst cities of the Midwest. She is the author of two poetry collections, Balloon Pop Outlaw Black and Motherland Fatherland Homelandsexuals, a New York Times Notable Book, and the memoir Priestdaddy, which was named one of the ten best books of 2017 by The New York Times Book Review. Lockwood’s writing has appeared in The New York Times, The New Yorker, The New Republic, and the London Review of Books, where she is a contributing editor.

Tommy "Teebs" Pico is the author of the books IRL, Nature Poem, Junk, and Feed. He's been the recipient of awards and fellowships from the Whiting Foundation, the Lambda Literary Foundation, the Poetry Foundation, the New York Foundation for the Arts, and the Brooklyn Public Library. He co-curates the reading series Poets with Attitude, co-hosts the podcast Food 4 Thot, and is a contributor editor at Literary Hub. Originally from the Viejas Indian reservation of the Kumeyaay nation, he now lives in Los Angeles, CA.

No One Is Talking About This: A Novel (Hardcover)

SELECTED AS A BEST BOOK OF THE YEAR BY:

The acclaimed second collection of poetry by Patricia Lockwood, Booker Prize finalist author of the novel No One Is Talking About This and the memoir Priestdaddy

SELECTED AS A BEST BOOK OF THE YEAR: The New York Times * The Boston Globe * Powell’s * The Strand * Barnes & Noble * BuzzFeed * Flavorwire

A Finalist for the Kingsley Tufts Award for Poetry

A New York Times Notable Book of the Year

From the Winner of the Whiting Award, an American Book Award, and finalist for a Lambda, Tommy Pico's Feed is the final book in the Teebs Cycle.

An NPR Best Book of the Year

From 2018 Whiting Award winner Tommy Pico, Junk is a book-length break-up poem that explores the experience of loss and erasure, both personal and cultural.

A book-length poem about how an American Indian writer can’t bring himself to write about nature, but is forced to reckon with colonial-white stereotypes, manifest destiny, and his own identity as an young, queer, urban-dwelling poet.

A Best Book of the Year at BuzzFeed, Interview, and more.

ISBN: 9780991429868
Availability: This book is in stock at our warehouse and will be at the Raven within 3-5 Business Days, once they've shipped it to us.
This book cannot be returned. Make sure what you're ordering is exactly what you want.
Published: Birds - September 1st, 2016