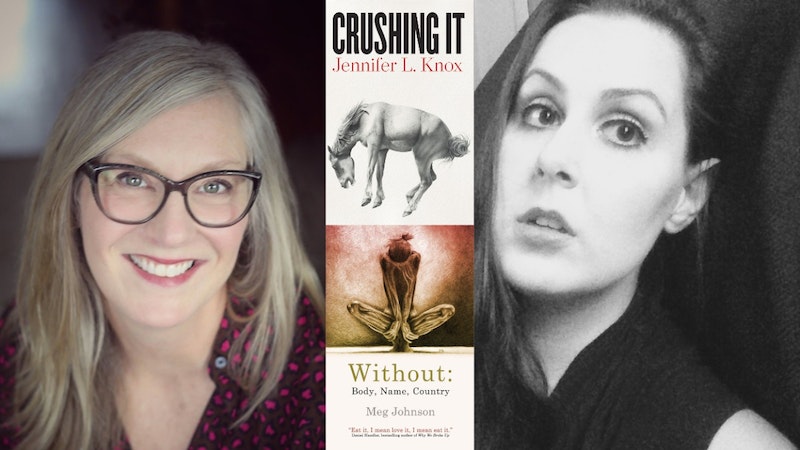 Join two acclaimed Midwestern poets for a weird and wonderful night of poetry!  This is a virtual event: RSVP and attend here!

The poems in Jennifer Knox’s darkly imaginative collection, Crushing It, unearth epiphanies in an unbounded landscape of forms, voices and subjects―from history to true crime to epidemiology―while exploring our tenuous connections and disconnections. From Merle Haggard lifting his head from a pile of cocaine to absurdist romps through an apocalypse where mushrooms learn to sing, this versatile collection is brimming with dark humor and bright surprise. Alongside Knox’s distinctive surrealism, Crushing It also reveals autobiography in poems about love, family, and adult ADHD, and Knox’s empathetic depictions of the ego’s need to assert its precious, singular “I” suggest that a self distinct from the hive, the herd, the flock, is an illusion. With clear-eyed spirit, Crushing It swallows all the world, and then some.

In Meg Johnson’s third full length collection, Without: Body, Name, Country, strange experiences become familiar and familiar experiences become strange as a human body, a sense of self, and an entire nation all teeter toward the verge of destruction. In daring poems and intimate flash nonfiction pieces, Johnson portrays a world that is corrupt yet full of possibilities. Sometimes frightening, sometimes funny, one woman’s struggles with health, identity, and politics reveal universal adversity, longing, and wildness. Reading this book is to climb “a spiral staircase in a tower full of fun house mirrors.” Without: Body, Name, Country is the book you didn’t know you needed.

Jennifer L. Knox is the author of four books of poems: Days of Shame & Failure (Bloof Books, 2015), The Mystery of the Hidden Driveway (Bloof, 2010), Drunk by Noon (Bloof, 2007), and A Gringo Like Me (Soft Skull Press, 2005, Bloof, 2007). Known for their dark, imaginative humor, her poems have appeared in publications such as The New Yorker, The American Poetry Review, Granta, McSweeney’s and four times in the Best American Poetry series. Her nonfiction writing has appeared in The New York Times and The Washington Post. Jennifer grew up in Lancaster, California—home to Captain Beefheart, Frank Zappa, and the Space Shuttle. She studied film and glassblowing at Alfred University, then earned BA in English at the University of Iowa, where she attended the undergraduate Writer’s Workshop. She earned her MFA from New York University. Her honors include three Milwaukee Poetry Slam champion titles and an Iowa Arts Council Fellowship for her crowdsourced poetry project, Iowa Bird of Mouth. Jennifer lives in central Iowa, where teaches at Iowa State University and in a series of private poetry writing classes online.

Meg Johnson is the author of the books Inappropriate Sleepover (The National Poetry Review Press, 2014), The Crimes of Clara Turlington (Vine Leaves Press, 2015), and Without: Body, Name, Country (Vine Leaves Press, 2020). Without: Body, Name, Country was nominated for the 2020 Goodreads Choice Awards. The Crimes of Clara Turlington won the 2015 Vignette Collection Award. Inappropriate Sleepover was the runner-up for the Rousseau Prize for Literature. ﻿Both books were also NewPages Editor's Picks. Meg's poems have appeared in Hobart, Nashville Review, Painted Bride Quarterly, The Puritan, Sugar House Review, Verse Daily, and others. Her nonfiction has appeared in BUST, Ms. Magazine, The Good Men Project, and others.

The poems in Jennifer L. Knox's darkly imaginative collection, Crushing It, unearth epiphanies in an unbounded landscape of forms, voices and subjects--from history to true crime to epidemiology--while exploring our tenuous connections and disconnections.

In Meg Johnson's third full length collection, Without: Body, Name, Country, strange experiences become familiar and familiar experiences become strange, as a human body, a sense of self, and an entire nation all teeter toward the verge of destruction.