Todd Melby: The Making of FARGO 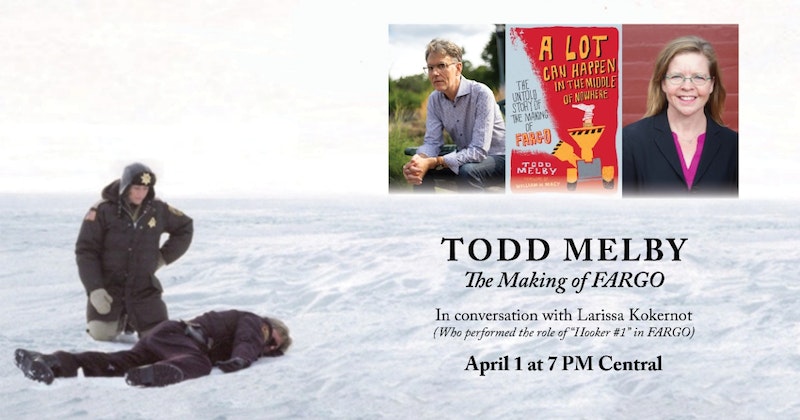 This is a virtual event. RSVP here!

Join Todd Melby as he discusses his new book A Lot Can Happen in the Middle of Nowhere : The Untold Story of the Making of Fargo with Larissa Kokernot, who performed the role of Hooker #1 in the film.

Go behind the scenes at this classic '90s film from cinematic masters Joel and Ethan Coen. Ya, you betcha, you’re gonna discover some fascinating tidbits to celebrate the film's 25th anniversary. The 1996 movie Fargo stirred widespread curiosity about snowy winters, funny accents, and bloody mayhem on the frozen tundra of Minnesota and North Dakota. The film won two Academy Awards and inspired a popular, award-winning television series. It is also a quintessentially Minnesota film—or is it? A Lot Can Happen in the Middle of Nowhere presents the untold stories behind the making of Joel and Ethan Coen's most memorable film. It explores the behind-the-scenes creative moments that made Fargo a critical and cultural success, including casting struggles, the battles over dialect, production challenges (a lack of snow), and insights from the screenplay and deleted scenes. Author Todd Melby examines to what extent the story was inspired by true events (as the film claims), and whether the Coens are trustworthy narrators of their own story. In addition to biographical details about the Coen Brothers, the book reveals what Fargo says about Minnesota and the Midwest.

Todd Melby is a reporter, documentarian, and filmmaker. In 2016, he co-produced "We Don't Talk Like That: Fargo and the Midwest Psyche," a one-hour radio documentary about the movie. "Black Gold Boom", his public media series on North Dakota's oil boom, featured stories of hope and despair. "Spirit and Body Willing: Sex Over Age 70" and "Death's Footprint", radio documentaries he co-produced with Diane Richard, won national Edward R. Murrow awards. He lives in Minneapolis. Visit him at toddmelby.com.

Larissa Kokernot is a Founding Member of Chalk Rep. For the company she has directed Three Sisters, Family Planning (Ovation Awards for Best Play in an Intimate Theatre and for Director), Stray and Full Disclosure. Regional directing credits include work with Eye of the Storm Theatre in Minneapolis where she served as Artistic Associate for six years, Indiana Repertory Theatre, Ten Thousand Things, The Children’s Theatre, Guthrie Theater, The Playwright’s Center, California Repertory Theatre, Watts Village Theatre, La Jolla Playhouse and Oregon Shakespeare Festival where she was the 2007 Phil Killian Directing Fellow. Larissa received her B.A. in Theater from Brown University and an M.F.A. in Directing from the University of California, San Diego. Larissa lives in Los Angeles with her husband, Karl Gajdusek, and their sons Kade and Nicholas.

A Lot Can Happen in the Middle of Nowhere: The Untold Story of the Making of Fargo (Paperback)

ISBN: 9781681341880
Availability: This book is in stock at our warehouse and will be at the Raven within 3-5 Business Days, once they've shipped it to us.
Published: Minnesota Historical Society Press - March 2nd, 2021

Go behind the scenes of this classic nineties film from cinematic masters Joel and Ethan Coen. Yah, you betcha, you're gonna discover some fascinating tidbits to celebrate the film's twenty-fifth anniversary.