University Press of Kansas and the Raven Present LOST SOUL OF THE AMERICAN PRESIDENCY: THE DECLINE INTO DEMAGOGUERY AND THE PROSPECTS FOR RENEWAL 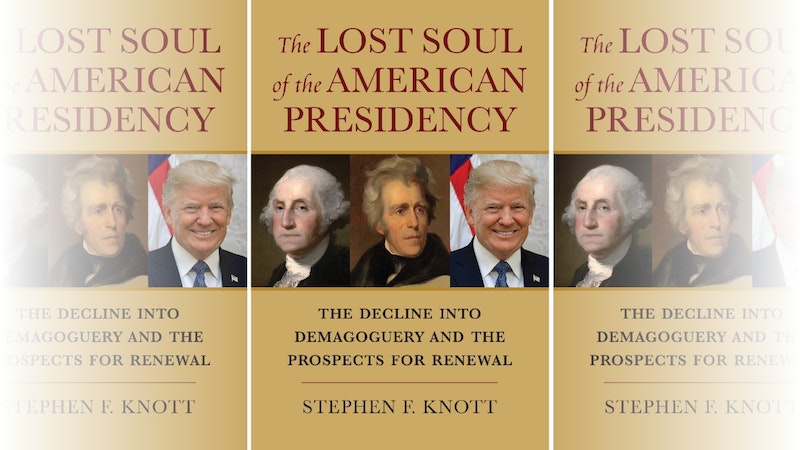 This is a virtual event. Click here to register.

In association with University Press of Kansas, Stephen F. Knott will present his new book The Lost Soul of the American Presidency: The Decline into Demagoguery and the Prospects for Renewal.

The American presidency is not what it once was. Nor, Stephen F. Knott contends, what it was meant to be. Taking on an issue as timely as Donald Trump’s latest tweet and old as the American republic, the distinguished presidential scholar documents the devolution of the American presidency from the neutral, unifying office envisioned by the framers of the Constitution into the demagogic, partisan entity of our day.

The presidency of popular consent, or the majoritarian presidency that we have today, far predates its current incarnation. The executive office as James Madison, George Washington, and Alexander Hamilton conceived it would be a source of national pride and unity, a check on the tyranny of the majority, and a neutral guarantor of the nation’s laws. The Lost Soul of the American Presidency shows how Thomas Jefferson’s “Revolution of 1800” remade the presidency, paving the way for Andrew Jackson to elevate “majority rule” into an unofficial constitutional principle—and contributing to the disenfranchisement, and worse, of African Americans and Native Americans. In Woodrow Wilson, Knott finds a worthy successor to Jefferson and Jackson. More than any of his predecessors, Wilson altered the nation’s expectations of what a president could be expected to achieve, putting in place the political machinery to support a “presidential government.”

As difficult as it might be to recover the lost soul of the American presidency, Knott reminds us of presidents who resisted pandering to public opinion and appealed to our better angels—George Washington, John Quincy Adams, Abraham Lincoln, and William Howard Taft, among others—whose presidencies suggest an alternative and offer hope for the future of the nation’s highest office.

Stephen F. Knott is professor of national security affairs at the US Naval War College in Newport, Rhode Island. His many books include Alexander Hamilton and the Persistence of Myth and Rush to Judgment: George W. Bush, the War on Terror, and His Critics, both from Kansas, and Secret and Sanctioned: Covert Operations and the American Presidency.

The Lost Soul of the American Presidency: The Decline Into Demagoguery and the Prospects for Renewal (Paperback)

The American presidency is not what it once was. Nor, Stephen F. Knott contends, what it was meant to be.