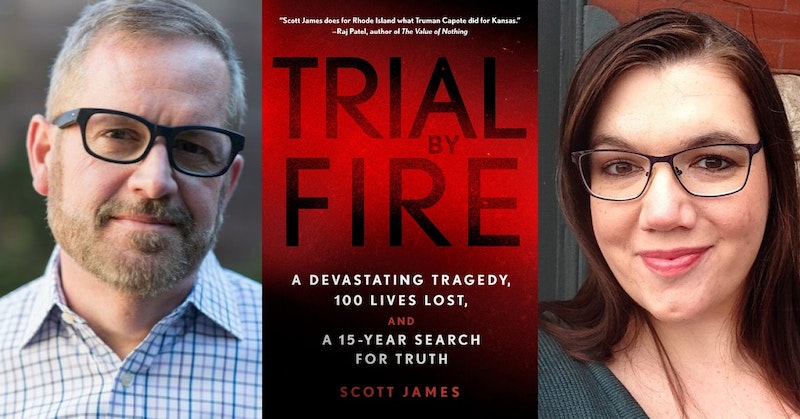 Where true crime meets hair metal: join Scott James as he discusses his new book TRIAL BY FIRE: A DEVASTATING TRAGEDY, 100 LIVES LOST, AND A 15-YEAR SEARCH FOR TRUTH with Rachel McCarthy James.

In only 90 seconds, a fire in the Station nightclub left 100 people dead or dying and injured hundreds more. It would take years to find out why—and who was really at fault.

All it took for a hundred people to die during a show by the hair metal band Great White was a sudden burst from four giant sparklers that ignited the acoustical foam lining the Station nightclub. But who was at fault? And who would pay? This being Rhode Island, the two questions wouldn't necessarily have the same answer.

Within 24 hours the governor of Rhode Island and the local police chief were calling for criminal charges, although the investigation had barely begun, key evidence still needed to be gathered, and many of the victims hadn't been identified. Though many parties could be held responsible, fingers pointed quickly at the two brothers who owned the club. But were they really to blame? Bestselling author and three-time Emmy Award-winning reporter Scott James investigates all the central figures, including the band's manager and lead singer, the fire inspector, the maker of the acoustical foam, as well as the brothers. Drawing on firsthand accounts, interviews with many involved, and court documents, James explores the rush to judgment about what happened that left the victims and their families, whose stories he also tells, desperate for justice.

Trial By Fire is the heart-wrenching story of the fire's aftermath because while the fire, one of America's deadliest, lasted minutes, the search for the truth would take years.

SCOTT JAMES is the bestselling author of two novels, The Sower (2009) and Soma (2007), finalist for the national Lambda Literary Award for debut fiction, under the pen name Kemble Scott. With his weekly eponymous San Francisco column for The New York Times, James found stories that drew coverage from other national and international media, including: The New Yorker, The London Times, The Guardian, and many more. He's been honored with three Emmy Awards for his work in television news. He lives in San Francisco, and is co-founder of The Castro Writers' Cooperative, known as The Coop, a co-working space for Bay Area writers.

RACHEL MCCARTHY JAMES is the author of the 2017 true crime book The Man from the Train, in collaboration with her dad Bill James. Her writing and reporting has appeared in Hazlitt, Bitch, McSweeney’s, The Week, and Robot Butt. She is represented by Laura Usselman of the Stuart Krichevsky Literary Agency.

Trial by Fire: A Devastating Tragedy, 100 Lives Lost, and a 15-Year Search for Truth (Hardcover)

In only 90 seconds, a fire in the Station nightclub killed 100 people and injured hundreds more. It would take nearly 20 years to find out whyand who was really at fault.