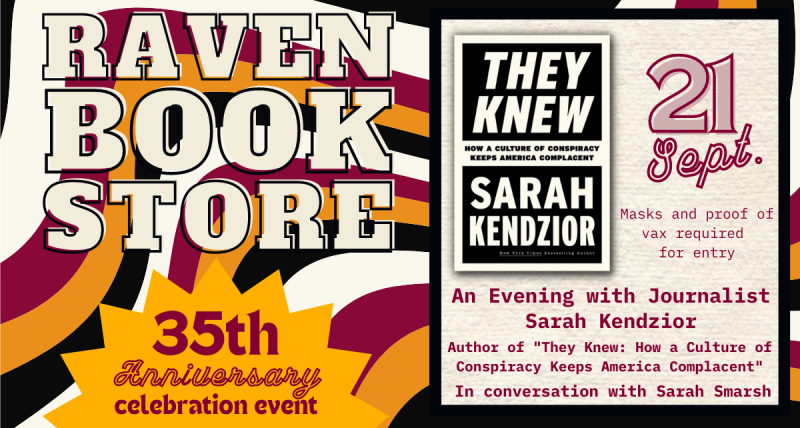 We’re celebrating our birthday with a booked September events calendar!

September 2022 marks 35 years since the Raven first took flight as Lawrence’s corner bookshop specializing in mysteries. We’ve gone on quite the journey since then—today, we serve as the city’s general interest new bookstore and are honored to hold the title of Bookstore of the Year 2022 from Publishers Weekly. To make it all the more exciting, this August marks one year since we hauled our shelves over to our new Mass Street location, putting us in the heart of our beloved downtown.

We want to commemorate these major milestones with the community we’ve been a part of for 35 years now! And since we believe in celebrating birth months rather than just birthdays, we’ve planned a whole month packed to the gills with fantastic and free literary events! There’s a little bit of everything, from a meet-and-greet and signing with William Kent Kreuger, to a virtual conversation with the author of Astrology for Black Girls, to a launch event for Raven owner Danny Caine’s revised edition of the store’s bestseller, How to Resist Amazon & Why.

So be sure you swing by the store to join the party and treat your shelves to some bookish goodness. You can head over to our events calendar to check out the full docket of our birthday bash events. Please note that masks and proof of vaccination are required to attend events at the Raven.

We’re excited to celebrate with you!

In her latest non-fiction title, They Knew: How a Culture of Conspiracy Keeps America Complacent, Missouri-based journalist and anthropologist Sarah Kendzior builds a compelling argument against the dangers of conspiracy theory culture by excising our nation’s political psyche and historical past. And on September 21 at 7 p.m., Kendzior is visiting the Raven to discuss They Knew in conversation with acclaimed Kansas journalist Sarah Smarsh (Heartland)! Join us for an evening of incisive political critique as these two extraordinary journalists analyze both what conspiracy theories are doing to our nation, and how they approach researching and writing such critical nonfiction analyses of America today.

This event is free and open to the public! Attendance at in-person Raven events requires a mask and proof of vaccination against COVID-19.

Sarah Kendzior is the New York Times bestselling author of Hiding in Plain Sight and The View from Flyover Country. She has a Ph.D. in anthropology from Washington University in St. Louis, where she researched propaganda and state crimes in authoritarian regimes. She is the co-host of the acclaimed podcast Gaslit Nation with Andrea Chalupa and was named by Foreign Policy as one of the “100 people you should be following on Twitter to make sense of global events.” Her reporting has been featured in many publications, including NBC News, The Guardian, The Atlantic, Fast Company, The Chicago Tribune, TeenVogue, The Globe and Mail, and The New York Times. She lives in St. Louis.

About the Guest Speaker

Sarah Smarsh is a journalist who has covered socioeconomic class, politics and public policy for The New York Times, The Atlantic, National Geographic, The New Yorker, Harper’s and many other publications. Her first book, Heartland: A Memoir of Working Hard and Being Broke in the Richest Country on Earth (Scribner, 2018), was an instant New York Times bestseller, a finalist for the National Book Award and winner of the Chicago Tribune Literary Award. Smarsh’s second book, She Come By It Natural: Dolly Parton and the Women Who Lived Her Songs (Scribner, 2020), was a finalist for the National Book Critics Circle Award.

A former writing professor, Smarsh has served as a Shorenstein Fellow at Harvard University’s Kennedy School of Government and a Pritzker Fellow at the University of Chicago Institute of Politics. She is a frequent speaker and commentator on economic inequality. She lives in Kansas.

In They Knew, New York Times best-selling author Sarah Kendzior explores the United States’ “culture of conspiracy,” putting forth a timely and unflinching argument: uncritical faith in broken institutions is as dangerous as false narratives peddled by propagandists. Conspiracy theories are on the rise because officials refuse to enforce accountability for real conspiracies.

They Knew discusses conspiracy culture in a rapidly declining United States struggling with corruption, climate change, and other crises. As the actions of the powerful remain shrouded in mystery – like the Jeffrey Epstein operation – it is unsurprising that people turn to conspiracy theories to fill the informational void. They Knew exposes the tactics these powerful actors use to placate an inquisitive public.

In Kendzior’s signature whip smart prose and eviscerating arguments, They Knew unearths decades of buried American history, providing an essential and critical look at how to rebuild our democracy by confronting the political lies and crimes that have shaped us.

They Knew: How a Culture of Conspiracy Keeps America Complacent (Hardcover)

“Every sentence delivered. The pathos of truth-seeking left me thinking of Herman Melville."
—Timothy Snyder, #1 New York Times bestselling author of On Tyranny

Heartland: A Memoir of Working Hard and Being Broke in the Richest Country on Earth (Hardcover)

An essential read for our times: an eye-opening memoir of working-class poverty in America that will deepen our understanding of t