The Raven's 35th Birthday Bash: Book launch for "The Unbalancing" by R.B. Lemberg 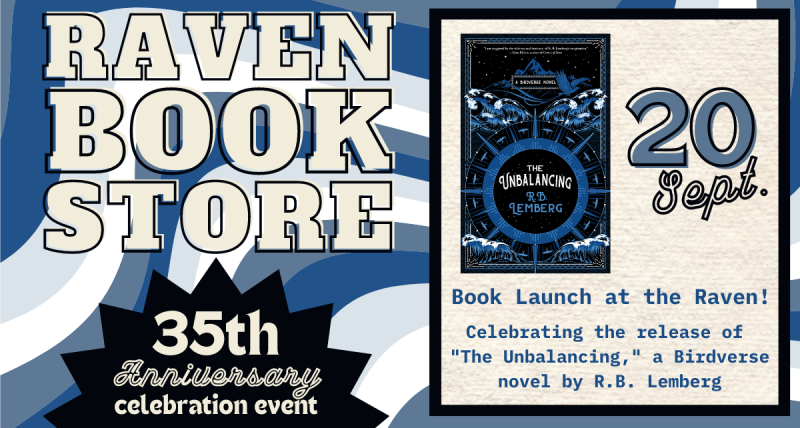 We're celebrating our birthday with a booked September events calendar!

September 2022 marks 35 years since the Raven first took flight as Lawrence’s corner bookshop specializing in mysteries. To make it all the more exciting, this August marks one year since we hauled all of our shelves over to our new Mass Street location, putting us in the heart of our beloved downtown. We want to commemorate these major milestones with the community we’ve been a part of for 35 years now. And since we believe in celebrating birth months rather than just birthdays, we’ve planned a whole month packed to the gills with fantastic and free literary events, like this one!

So be sure you swing by the store to join the party and treat your shelves to some bookish goodness. You can head over to our events calendar to check out the full docket of our birthday bash events. Please note that masks and proof of vaccination are required to attend events at the Raven.

We’re excited to celebrate with you!

What could possibly be more perfect than a bookstore called the Raven hosting the release party for a Birdverse novel? Get excited, because that’s exactly what’s happening on September 14 at 7 p.m.! Join us for the book launch celebration for R.B. Lemberg’s title The Unbalancing, the first full-length novel set in their Birdverse fantasy world. The evening will feature a reading and Q&A, with the chance to get your copies of The Unbalancing signed at the end!

This event is free and open to the public! Masks and proof of vaccination are required for entry.

R. B. Lemberg is a queer, bigender immigrant from Eastern Europe and Israel. Their stories and poems have appeared in Queers Destroy Science Fiction!, Beneath Ceaseless Skies, Uncanny Magazine, Sisters of the Revolution: A Feminist Speculative Fiction Anthology, and many other venues. Lemberg’s work has been a finalist for the Nebula, Crawford, and other awards. Their debut Birdverse novella, The Four Profound Weaves, came out from Tachyon in 2020; the novella was nominated for the World Fantasy, Locus, Nebula, and Ignyte awards and it was selected for the Otherwise Award Honor List. You can find more of their work on their Patreon (patreon.com/rblemberg) and a full bio at rblemberg.net.

In this first full-length novel from the acclaimed Birdverse, new love blossoms between an impatient starkeeper and a reclusive poet as they try together to save their island home. Nebula, Locus, and Ignyte finalist R. B. Lemberg (The Four Profound Weaves) has crafted a gorgeous tale of the inevitable transformations of communities and their worlds. The Unbalancing is rooted in the mystical cosmology, neurodiversity, and queerness that infuses Lemberg’s lyrical prose, which has invited glowing comparisons to N. K. Jemisin, Patricia A. McKillip, and Ursula K. Le Guin.

“An enchanting world of star lore, magic and gender identity with a roster of heartfelt characters.”

Beneath the waters by the islands of Gelle-Geu, a star sleeps restlessly. The celebrated new starkeeper Ranra Kekeri, who is preoccupied by the increasing tremors, confronts the problems left behind by her predecessor.

Meanwhile, the poet Erígra Lilún, who merely wants to be left alone, is repeatedly asked by their ancestor Semberí to take over the starkeeping helm. Semberí insists upon telling Lilún mysterious tales of the deliverance of the stars by the goddess Bird.

When Ranra and Lilún meet, sparks begin to fly. An unforeseen configuration of their magical deepnames illuminates the trouble under the tides. For Ranra and Lilún, their story is just beginning; for the people of Gelle-Geu, it may well be too late to save their home.

About the Birdverse: The Birdverse is the creation of fantasy author R. B. Lemberg. It is a complex, culturally diverse world, with a range of LGBTQIA characters and different family configurations. Named after its deity, Bird, Birdverse shorter works have been nominated for the Nebula, Hugo, Tiptree award, and Rhysling awards. The Four Profound Weaves is the first full-length work set in the Birdverse.

The Unbalancing: A Birdverse Novel (Paperback)

In this first full-length novel from the acclaimed Birdverse, new love blossoms between an impatient starkeeper and a reclusive poet as they try together to save their island home. Nebula, Locus, and Ignyte finalist R. B. Lemberg (The Four Profound Weaves) has crafted a gorgeous tale of the inevitable transformations of communities and their worlds.