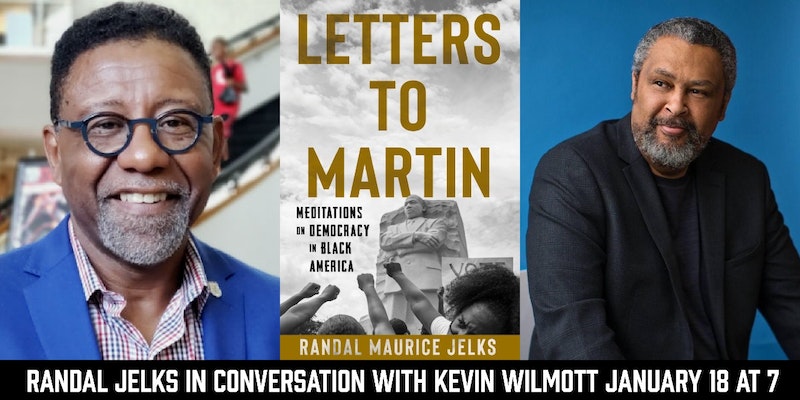 THIS IS A VIRTUAL EVENT. Click here to RSVP.

“You’ll find hope in these pages. ” —Jonathan Eig, author of Ali: A Life

Evoking Martin Luther King Jr.’s “Letter from Birmingham Jail,” these meditations, written in the form of letters to King, speak specifically to the many public issues we presently confront in the United States—economic inequality, freedom of assembly, police brutality, ongoing social class conflicts, and geopolitics.  Award-winning author Randal Maurice Jelks invites readers to reflect on US history by centering on questions of democracy that we must grapple with as a society.

Hearkening to the era when James Baldwin, Dorothy Day, Reinhold Niebuhr, and Richard Wright used their writing to address the internal and external conflicts that the United States faced, this book is a contemporary revival of the literary tradition of meditative social analysis.

These meditations on democracy provide spiritual oxygen to help readers endure the struggles of rebranding, rebuilding, and reforming our democratic institutions so that we can all breathe.

Kevin Willmott won an Academy Award and the BAFTA the British Academy award for co-writing with Spike Lee the feature film Blackkklansman. The film also won the Grand Prix at the Cannes film Festival. He also co-wrote and is the Executive Producer of the critically acclaimed film, Chi-Raq also directed by Spike Lee. The film is on numerous best of 2015 lists including best film and best screenplay by The New Yorker Magazine. Award winning Films written and directed by Willmott include Ninth Street, CSA -Confederate States of America, the Battle for Bunker Hill, Jayhawkers and Destination Planet Negro. Documentaries directed by Willmott include: From Separate to Equal: The Creation of Truman Medical Center, Gordon Parks Elementary, Fast Break: The Legendary Coach John Mclendon, and William Allen White: What’s the Matter with Kansas. He currently co-wrote with Spike Lee the feature film, Da Five Bloods for Netflix.  Willmott recently co-wrote and directed the critically acclaimed feature film The 24th about the Houston Riot of 1917.  Willmott grew up in Junction City, Kansas and attended Marymount College receiving his BA in Drama. After graduation, he returned home, working as a peace and civil rights activist, fighting for the rights of the poor, creating two Catholic Worker shelters for the homeless and forcing the integration of several long-standing segregated institutions. He attended graduate studies at New York University, Tisch School of the Arts, receiving several writing awards and his M.F.A. in Dramatic Writing. Willmott is a Professor in the Media and Film Studies Department of Kansas University.

Letters to Martin: Meditations on Democracy in Black America (Hardcover)

“You’ll find hope in these pages.