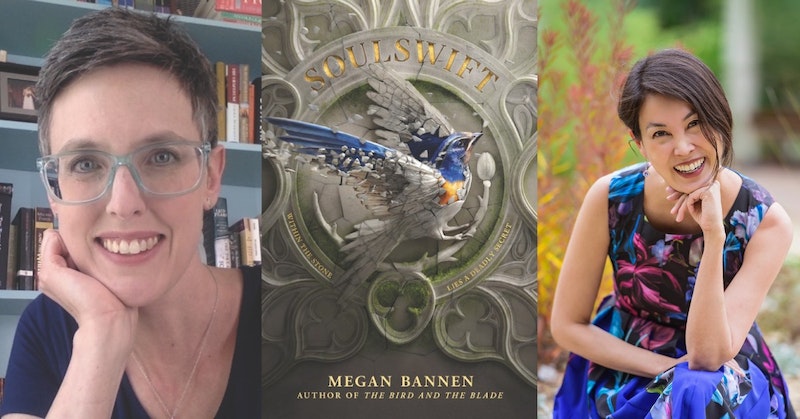 NOTE: This is a virtual event. Register here!

A dark, epic fantasy about a girl who must reevaluate everything she believes after she is betrayed and hunted by the religion that raised her—from Megan Bannen, author of The Bird and the Blade. Perfect for fans of The Winner’s Curse and The Girl of Fire and Thorns.

Gelya is a Vessel, a girl who channels the word of the One True God through song. Cloistered with the other Vessels of her faith, she believes—as all Ovinists do—that a saint imprisoned Elath the Great Demon centuries ago, saving humanity from earthly temptation.

When Gelya stumbles into a deadly cover-up by the Ovinists’ military, she reluctantly teams up with Tavik, an enemy soldier, to survive. Tavik believes that Elath is actually a mother goddess who must be set free, but while he succeeds in opening Her prison, he inadvertently turns Gelya into Elath’s unwilling human vessel.

Now the church that raised Gelya considers her a threat. In a race against the clock, she and Tavik must find a way to exorcise Elath’s presence from her body. But will this release stop the countdown to the end of the world, or will it be the cause of the earth’s destruction? And as Tavik and Gelya grow closer, another question lingers between them: What will become of Gelya?

Megan Bannen is the author of Soulswift and The Bird and the Blade, a Kirkus Best Young Adult Book of 2018 and an Indies Introduce selection. An avid coffee drinker and mediocre ukulele player, Megan lives in the Kansas City area with her husband and their two children. She's a full-time writer, but her librarian heart will always belong to the reference desk. She can be found online at www.meganbannen.com.

Stacey Lee is an award-winning author of historical and contemporary young adult fiction, including UNDER A PAINTED SKY, OUTRUN THE MOON, winner of the 2017 Pen Center Award for Young Adult Fiction and the Asian Pacific American Librarians Association YA Book of the Year, THE SECRET OF A HEART NOTE, which sold in eight countries, and her most recent THE DOWNSTAIRS GIRL, which received five starred reviews and which Booklist called “Spectacular." Her books have been selected for the Amelia Bloomer list for feminist fiction, the as well as the YALSA Best Fiction for Young Adults List, and the New York Public Library’s Best Books for Teens. A native of southern California and fourth-generation Chinese American, she is a founder of the We Need Diverse Books movement and writes stories for all kids (even the ones who look like adults). Find her @staceyleeauthor on Instagram and Twitter.

A dark, epic fantasy about a girl who must rethink everything she believes after she is betrayed and hunted by the religion that raised her—from Megan Bannen, author of The Bird and the Blade. Perfect for fans of The Winner’s Curse and The Girl of Fire and Thorns.