Juliet Patterson, author of "Sinkhole," in conversation with Nikita Imafidon 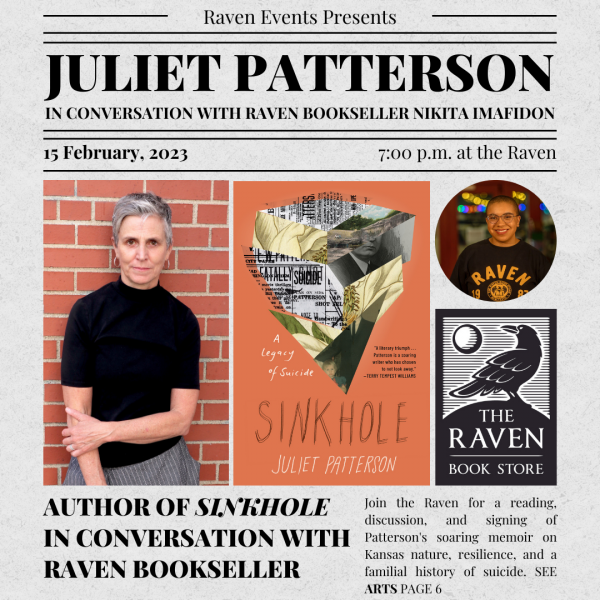 “When I started this lyrical exploration of suicide, inheritance, and place by lesbian poet Juliet Patterson, I had no idea that my home state would play such a central role. As it turns out, both of Patterson’s parents grew up in the former mining town of Pittsburg, KS, now ravaged by sinkholes. In an obsessive unearthing of family history spurred by grief for her father, Patterson investigates the lives and suicides of three family members: her father, and each of her parents’ fathers. As Patterson delicately processes her own experiences as a suicide survivor, she opens up a dialogue for readers—we can talk about suicide, and we should talk about suicide. Sinkhole is a beautiful, fascinating read.”—Mary, Raven Bookseller and Children’s Manager

"Sinkhole is an all-consuming look into nature and resilience, and it is my favorite book I’ve read this year. For Juliet Patterson, Sinkhole has two meanings: the endless mysteries of her family’s suicidal history and the treacherous land in Pittsburg, Kansas, the hometown of both of her parents and site of numerous sinkholes from overmining. In her personal search through the archives and backroads of her family’s past, she must face the questions surrounding the deaths of her grandfathers and her dad. Patterson’s haunting work explores queerness, grief, and how to keep questions from swallowing you whole."—Nikita, Raven Bookseller and Sidelines Manager

Sinkhole by Juliet Patterson has become a Raven staff favorite for its soaring prose, its focus on Pittsburg, KS, and its unflinching exploration of suicide, a severely under-discussed topic that impacts millions of lives. Join us in store on February 15, 2023 at 7:00 p.m. to hear Patterson read from this stunning elegy that vividly enacts Emily Dickinson’s dictum to “tell it slant.” Patterson will then be in conversation with Raven bookseller Nikita Imafidon regarding her work, with an audience Q&A and book signing to follow.

The Raven kindly requests that all event attendees wear a mask for the duration of the event. Thank you!

Juliet Patterson is the author of Sinkhole, as well as two collections of poems, Threnody and The Truant Lover, a finalist for the Lambda Award. Her poems and essays have appeared widely. She has received fellowships from the Jerome Foundation, the Minnesota State Arts Board, and the Minneapolis-based Institute for Community Cultural Development. Her other awards include the Arts & Letters Susan Atefat Prize in nonfiction and the Lynda Hull Memorial Poetry Prize. She lives in Minneapolis.

Nikita Imafidon (she/her) is the sidelines buyer and a co-owner of the Raven Book Store. She has been a bookseller for three and a half years, and she is an avid reader of graphic novels, social science books, and strange fiction. She is a Black queer embroidery artist with a passion for ephemeral communication, community building, and social justice. Find her work on Instagram at @nikita.the.star

A sublimely elegant, fractured reckoning with the legacy and inheritance of suicide in one American family.

In 2009, Juliet Patterson was recovering from a serious car accident when she learned her father had died by suicide. His death was part of a disturbing pattern in her family. Her father’s father had taken his own life; so had her mother’s. Over the weeks and months that followed, grieving and in physical pain, Patterson kept returning to one question: Why? Why had her family lost so many men, so many fathers, and what lay beneath the silence that had taken hold?

In three graceful movements, Patterson explores these questions. In the winter of her father’s death, she struggles to make sense of the loss—sifting through the few belongings he left behind, looking to signs and symbols for meaning. As the spring thaw comes, she and her mother depart Minnesota for her father’s burial in her parents’ hometown of Pittsburg, Kansas. A once-prosperous town of promise and of violence, against people and the land, Pittsburg is now literally undermined by abandoned claims and sinkholes. There, Patterson carefully gathers evidence and radically imagines the final days of the grandfathers—one a fiery pro-labor politician, the other a melancholy businessman—she never knew. And finally, she returns to her father: to the haunting subjects of goodbyes, of loss, and of how to break the cycle.

Sinkhole: A Legacy of Suicide (Hardcover)

A sublimely elegant, fractured reckoning with the legacy and inheritance of suicide in one American family.In 2009, Juliet Patterson was recovering from a serious car accident when she learned her father had died by suicide. His death was part of a disturbing pattern in her family. Her father's father had taken his own life; so had her mother's.

Part lamentation, part ode, Threnody (the word originates from the Greek, threnos, "wailing" and oide "ode."), examines the beauty and violence of our present ecological moment with a lyric and meditative eye.

Poetry. Juliet Patterson incorporates the voices of Emily Dickinson, Lorine Niedecker, and Wallace Stevens, drawing into her stunning debut a fascination with the difficult, the improbable, and the uneasy. There is a quiet ferocity to mourn the world's injustice and a passion in her work expressing the perplexities of love, grace, and consciousness.