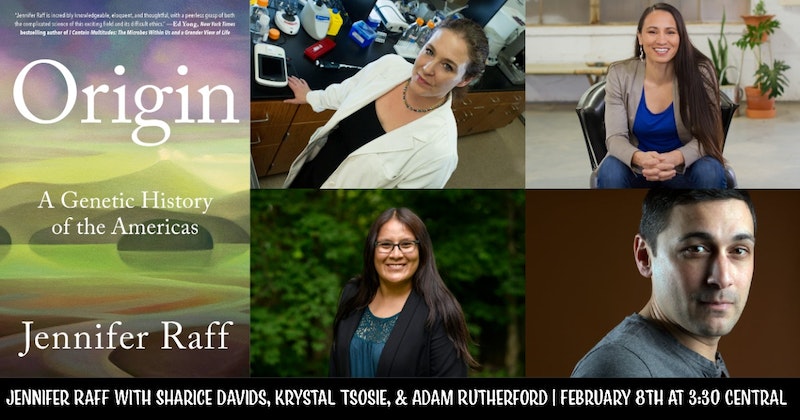 KU Professor Jennifer Raff launches her brand-new book Origin: A Genetic History of the Americas with a star-studded discussion with Krystal Tsosie and Adam Rutherford, plus an introduction by Representative Sharice Davids!

This is a free virtual event! RSVP here!

Jennifer Raff is an Associate Professor of Anthropology at the University of Kansas with a dual Ph.D. in anthropology and genetics and over fourteen years of experience in researching ancient and modern human DNA from the Americas. In addition to her research, she has been writing on issues of scientific literacy and anthropological research at her own website, Violent Metaphors, and for The Guardian, HuffPost and Evolution Institute blogs for several years. She has written for Forbes on emerging research in genetics and archaeology.

Krystal Tsosie is a Diné (Navajo) geneticist who about to finish her doctorate in genomics and health disparities at Vanderbilt University, and she will be a Presidential Postdoctoral Fellow at Arizona State University before transitioning to Assistant Professor in the Arizona State University’s School of Life Sciences in Spring 2023. Krystal specializes in equity-centered public health, genetic epidemiology, bioethics, and Indigenous genomic data sovereignty. She is an organizer of the Summer Internship for Indigenous Peoples in Genomics and a board member of the Native BioData Consortium, nonprofit research institute led by Indigenous scientists and tribal members in the United States. She is also an organizer of the IndigiData organization which trains Indigenous students in data science

Adam Rutherford is a geneticist, science writer, and broadcaster. He studied genetics at University College London, doing his PhD on the genetics and development of the eye. As well as writing for the science pages of The Guardian, he has written and presented many award-winning series and programs for the BBC, including the Radio 4 program Inside Science. He is also the author of several award winning books, including Rutherford and Fry’s Complete Guide to Absolutely Everything, How to Argue With a Racist, The Book of Humans, A Brief History of Everyone Who Ever Lived, and Creation. He has just published a new book entitled Control: The Dark History and Troubling Present of Eugenics, which will be available in the US edition starting November 15th.

Sharice Davids is the author of Sharice's Big Voice. Davids made history in 2018 when she became one of the first two Native American women elected to Congress -- and the first openly LGBTQ person to represent Kansas in Washington. A former mixed martial artist and first-generation college student, Sharice worked her way through Johnson County Community College in the district she now represents, before eventually earning a law degree from Cornell Law School. She went on to work in economic and community development on tribal reservations, including Pine Ridge. Sharice was later selected to the prestigious White House Fellowship program under President Barack Obama. Sharice was inspired to public service by her single mom, who served as an Army drill sergeant. Sharice is a resident of Roeland Park, Kansas.

Origin: A Genetic History of the Americas (Hardcover)

ORIGIN is the story of who the first peoples in the Americas were, how and why they made the crossing, how they dispersed south, and how they lived based on a new and