Join Ed Davis during his Great American Amtrak Book Tour for a discussion of the new book The Last Professional! Live and in-person at the Raven! 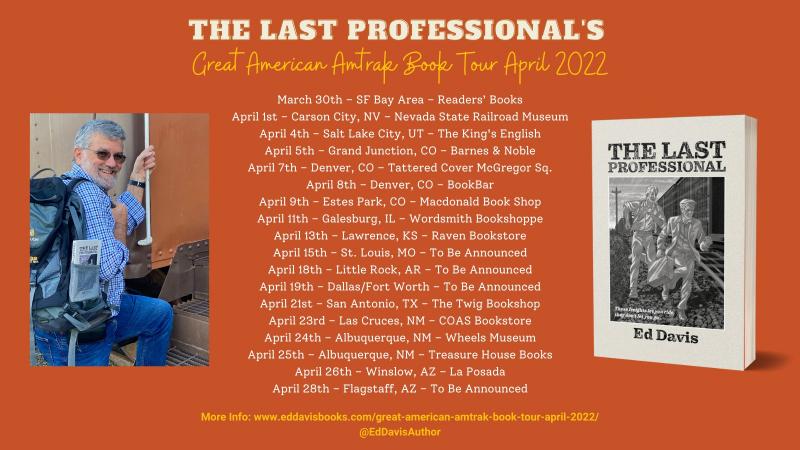 This is a story of America! Lynden Hoover, a young man on the brink of a new beginning, cannot embrace it without confronting the traumas of his past. Help comes from The Duke, an old loner who calls America's landscape his home. He clings to an honor code, but in fleeing from Short Arm, his merciless enemy, his code is being tested.

At the end of the 20th century few Knights of the Road still cling to their vanishing lifestyle. The Duke mentors Lynden, enlisting old traveling friends to keep himself and his apprentice just ahead of Short Arm's relentless pursuit. When two of those friends are murdered, the stakes become life or death.

Bonds are formed, secrets exposed, sacrifices made, trusts betrayed - all against a breathtaking American landscape of promise and peril. Three unforgettable characters, hurtling toward a spellbinding climax where pasts and futures collide, and lives hang in the balance.

Ed Davis began his writing career over forty years ago, pausing in boxcars, under street lamps, and in hobo jungles to capture the beats and rhythms of the road as he caught freight trains and vagabonded around the Pacific Northwest and Canada. The Last Professional began in a boxcar. His short stories have appeared in numerous literary journals. His novella, In All Things, and his collection of travel pieces, Road Stories, have both been Amazon Top Ten bestsellers. Ed's death row thriller, A Matter of Time, was written in real time, twenty-four hours, as the last day of the hero's life unfolds.

Lynden Hoover is on the brink of a new beginning with a fast-growing tech company, but he first needs to confront the traumas of his past. At age eleven Lynden found a surrogate father in the form of a hobo riding a train, the Tramp, who abused and discarded Lynden. The memory of the Tramp has haunted Lynden's life, ruining his relationships.