Devon A. Mihesuah in conversation with Carrie Cornelius 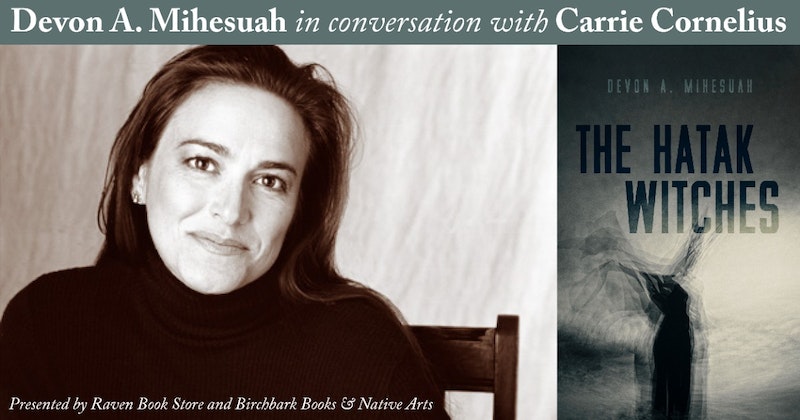 The Raven Book Store and Birchbark Books & Native Arts are teaming up to present Devon Mihesuah and her new book The Hatak Witches. Joining Mihesuah in conversation will be Carrie Cornelius, librarian of Haskell Indian Nations University.

After a security guard is found dead and another wounded at the Children’s Museum of Science and History in Norman, Oklahoma, Detective Monique Blue Hawk and her partner Chris Pierson are summoned to investigate. They find no fingerprints, no footprints, and no obvious means to enter the locked building.

Monique discovers that a portion of an ancient and deformed skeleton had also been stolen from the neglected museum archives. Her uncle, the spiritual leader Leroy Bear Red Ears, concludes that the stolen remains are those of Hatak haksi, a witch and the matriarch of the Crow family, a group of shape-shifting Choctaws who plan to reestablish themselves as the powerful creatures they were when the tribe lived in Mississippi. Monique, Leroy, and Chris must stop the Crows, but to their dread, the entities have retreated to the dark and treacherous hollow in the center of Chalakwa Ranch. The murderous shape-shifters believe the enormous wild hogs, poisonous snakes, and other creatures of the hollow might form an adequate defense for Hatak haksi.

But what no one counts on is the unexpected appearance and power of the Old Ones who guard the lands of the Choctaw afterlife. Blending tribal beliefs and myths into a modern context, The Hatak Witches continues the storyline of Choctaw cosmology and cultural survival that are prominent in Devon A. Mihesuah’s award-winning novel, The Roads of My Relations.

Devon A. Mihesuah, an enrolled citizen of the Choctaw Nation of Oklahoma, is the Cora Lee Beers Price Professor in the Humanities Program at the University of Kansas. A historian by training, Mihesuah is the former editor of American Indian Quarterly and the author of over a dozen award-winning books on Indigenous history and current issues, as well as novels.

After a security guard is found dead and another wounded at the Children’s Museum of Science and History in Norman, Oklahoma, Detective Monique Blue Hawk and her partner Chris Pierson are summoned to investigate.