Dawnie Walton in conversation with C Pam Zhang: The Final Revival of Opal and Nev 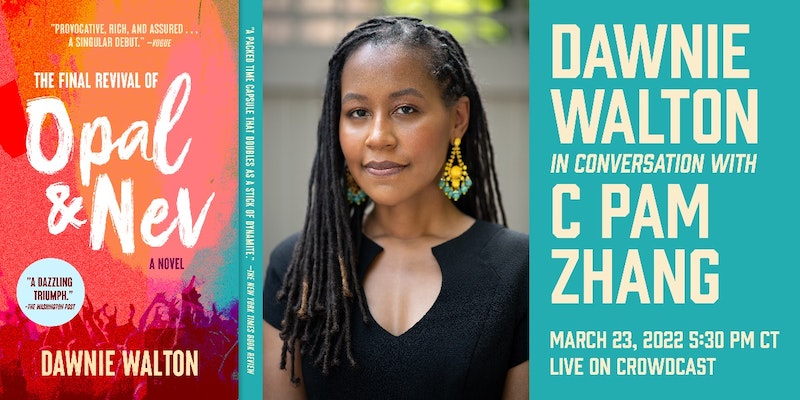 This is a virtual event! Click here to RSVP.

Dawnie Walton celebrates the paperback launch of her acclaimed debut novel The Final Revival of Opal and Nev. Joining her in conversation will be celebrated novelist C Pam Zhang.

An electrifying novel about the meteoric rise of an iconic interracial rock duo in the 1970s, their sensational breakup, and the dark secrets unearthed when they try to reunite decades later for one last tour.

“Feels truer and more mesmerizing than some true stories. It’s a packed time capsule that doubles as a stick of dynamite.” —THE NEW YORK TIMES BOOK REVIEW

Opal is a fiercely independent young woman pushing against the grain in her style and attitude, Afro-punk before that term existed. Coming of age in Detroit, she can’t imagine settling for a 9-to-5 job—despite her unusual looks, Opal believes she can be a star. So when the aspiring British singer/songwriter Neville Charles discovers her at a bar’s amateur night, she takes him up on his offer to make rock music together for the fledgling Rivington Records.

In early seventies New York City, just as she’s finding her niche as part of a flamboyant and funky creative scene, a rival band signed to her label brandishes a Confederate flag at a promotional concert. Opal’s bold protest and the violence that ensues set off a chain of events that will not only change the lives of those she loves, but also be a deadly reminder that repercussions are always harsher for women, especially black women, who dare to speak their truth.

Decades later, as Opal considers a 2016 reunion with Nev, music journalist S. Sunny Shelton seizes the chance to curate an oral history about her idols. Sunny thought she knew most of the stories leading up to the cult duo’s most politicized chapter. But as her interviews dig deeper, a nasty new allegation from an unexpected source threatens to blow up everything.

Provocative and chilling, The Final Revival of Opal & Nev features a backup chorus of unforgettable voices, a heroine the likes of which we’ve not seen in storytelling, and a daring structure, and introduces a bold new voice in contemporary fiction.

Dawnie Walton is a fiction writer and journalist whose work explores identity, place, and the influence of pop culture. She has won fellowships from the MacDowell Colony and the Tin House Summer Workshop, and earned her MFA from the Iowa Writers’ Workshop. Previously, she worked as an executive-level editor for magazine and multimedia brands, including Essence, Entertainment Weekly, Getty Images, and LIFE. A native of Jacksonville, Florida, she lives with her husband in Brooklyn.

Born in Beijing but mostly an artifact of the United States, C Pam Zhang has lived in thirteen cities across four countries and is still looking for home. She’s been awarded support from Tin House, Bread Loaf, Aspen Words and elsewhere, and currently lives in San Francisco. Her debut novel How Much of these Hills is Gold is out in paperback April 6, 2022.

The Final Revival of Opal & Nev: A Novel (Paperback)

An electrifying novel about the meteoric rise of an iconic interracial rock duo in the 1970s, their sensational breakup, and the dark secrets unearthed when they try to reunite decades later for one last tour.

How Much of These Hills Is Gold: A Novel (Paperback)

A NEW YORK TIMES  NOTABLE BOOK OF THE YEAR

ONE OF BARACK OBAMA'S FAVORITE BOOKS OF THE YEAR

LONGLISTED FOR THE 2020 BOOKER PRIZE

FINALIST FOR THE 2020 CENTER FOR FICTION FIRST NOVEL PRIZE