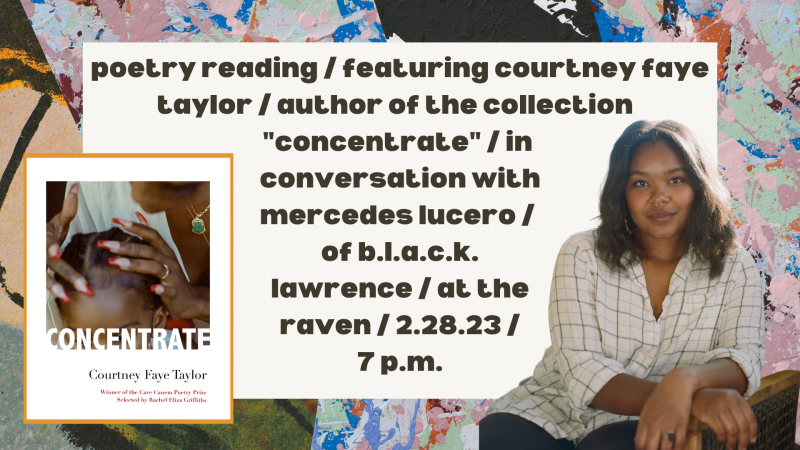 New year, new understanding of poetry as a form of art and cultural discourse! We’re delighted to host a night of reading on February 28 at 7 p.m., featuring Courtney Faye Taylor, award-winning author of the virtuosic debut, Concentrate, and Lawrence poet Mercedes Lucero. After the readings, Taylor and Lucero will discuss everything under the poetic moon, from creative practice to innovation to the future of form and experimentation.

The Raven kindly requests that all attendees wear a mask for the duration of the event. Thank you!

P.S. Lucero is a member of BLACK (Black Literature & Arts Collective of Kansas) Lawrence, an organization that believes in the celebration of Black creative expression as a vehicle for artist & community growth. Find out more about their work here!

Courtney Faye Taylor is a writer and visual artist. She is the author of Concentrate (Graywolf Press, 2022), selected by Rachel Eliza Griffiths as the winner of the Cave Canem Poetry Prize. Courtney earned her BA from Agnes Scott College and her MFA from the University of Michigan Helen Zell Writers’ Program where she received the Hopwood Prize in Poetry. A recipient of the 92Y Discovery Prize and an Academy of American Poets Prize, Courtney’s work can be found in Poetry Magazine, The Nation, Ploughshares, Best New Poets, and elsewhere. Find more of her work on her website.

Mercedes Lucero (she/they) is the author of Stereometry (Another New Calligraphy), and the chapbook In the Garden of Broken Things (Flutter Press). They are the winner of the Langston Hughes Creative Writing Award for Poetry and have received several Pushcart Prize nominations. Other work of theirs has been featured on The Project on the History of Black Writing and published widely including in New Orleans Review, New Ohio Review, Puerto del Sol, Fourteen Hills, Paper Darts, The Chicago Tribune’s Printers Row Journal, The Pinch, and Heavy Feather Review among others. Find more of her work on her website.

In her virtuosic debut, Courtney Faye Taylor explores the under-told history of the murder of Latasha Harlins—a fifteen-year-old Black girl killed by a Korean shop owner, Soon Ja Du, after being falsely accused of shoplifting a bottle of orange juice. Harlins’s murder and the following trial, which resulted in no prison time for Du, were inciting incidents of the 1992 Los Angeles uprising, and came to exemplify the long-fraught relationship between Black and Asian American communities in the United States. Through a collage-like approach to collective history and storytelling, Taylor’s poems present a profound look into the insidious points at which violence originates against—and between—women of color.

Concentrate displays an astounding breadth of form and experimentation in found texts, micro-essays, and visual poems, merging worlds and bending time in order to interrogate inexorable encounters with American patriarchy and White supremacy manifested as sexual and racially charged violence. These poems demand absolute focus on Black womanhood’s relentless refusal to be unseen, even and especially when such luminosity exposes an exceptional vulnerability to harm and erasure. Taylor’s inventive, intimate book radically reconsiders the cost of memory, forging a path to a future rooted in solidarity and possibility. “Concentrate,” she writes. “We have decisions to make. Fire is that decision to make.”