A Virtual Evening with Dr. Clarence Lusane, author of "Twenty Dollars and Change"

Note: This is a free online event. Register here! 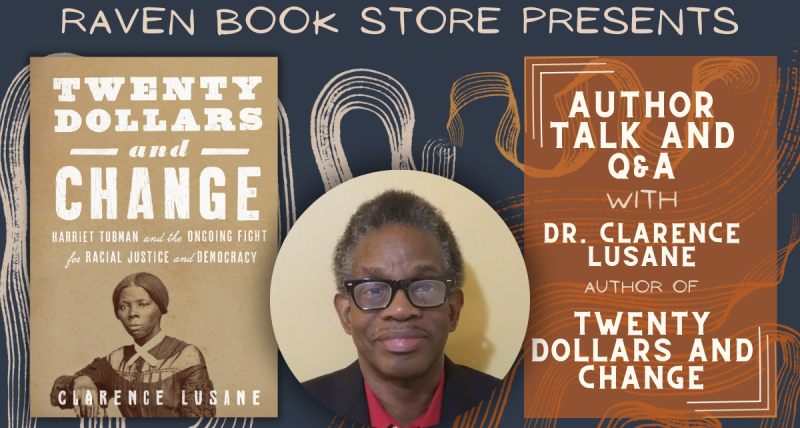 Dr. Clarence Lusane—author, activist, scholar, journalist, and professor—promises to start off our 2023 events season with a bang!

While we’re still waiting for Harriet Tubman to be on the $20 bill in lieu of Andrew Jackson, join us virtually for a discussion of Dr. Lusane’s recent title Twenty Dollars and Change on February 8 at 7 p.m. In this incisive political science text, Dr. Lusane examines the inextricable linkage between racist historical narratives and pervasive social inequities. Log on and learn more about national currency, Tubman’s legacy, and more with a renowned historian!

Register for this free event here!

Twenty Dollars and Change places Harriet Tubman’s life and legacy in a long tradition of resistance, illuminating the ongoing struggle to realize a democracy in which her emancipatory vision prevails.

America is in the throes of a historic reckoning with racism, with the battle for control over official narratives at ground zero. Across the country, politicians, city councils, and school boards are engaged in a highly polarized debate about whose accomplishments should be recognized, and whose point of view should be included in the telling of America’s history.

In Twenty Dollars and Change, political scientist Clarence Lusane, author of the acclaimed The Black History of the White House, writes from a basic premise: Racist historical narratives and pervasive social inequities are inextricably linked—changing one can transform the other. Taking up the debate over the future of the twenty-dollar bill, Lusane uses the question of Harriet Tubman vs. Andrew Jackson as a lens through which to view the current state of our nation's ongoing reckoning with the legacies of slavery and foundational white supremacy. He places the struggle to confront unjust social conditions in direct connection with the push to transform our public symbols, making it plain that any choice of whose life deserves to be remembered and honored is a direct reflection of whose basic rights are deemed worthy of protection, and whose are not.

Dr. Clarence Lusane is an author, activist, scholar, and journalist. He is a Professor and former Chairman of Howard University’s Department of Political Science. Lusane earned his B.A. in Communications from Wayne State University and both his Master's and Ph.D. from Howard University in Political Science. He's been a political consultant to the Congressional Black Caucus Foundation and a former Commissioner for the DC Commission on African American Affairs. He frequently appears on MSNBC and CSPAN, and was invited by the Obamas to speak at the White House. Author of many books, including The Black History of the White House, Lusane lives and works in the Washington, DC area.

Twenty Dollars and Change: Harriet Tubman and the Ongoing Fight for Racial Justice and Democracy (Paperback)

Twenty Dollars and Change places Harriet Tubman's life and legacy in a long tradition of resistance, illuminating the ongoing struggle to realize a democracy in which her emancipatory vision prevails.

The Black History of the White House presents the untold history, racial politics, and shifting significance of the White House as experienced by African Americans, from the generations of enslaved people who helped to build it or were forced to work there to its first black First Family, the Obamas.

ISBN: 9780415932950
Availability: This book is in stock at our warehouse and will be at the Raven within 3-5 Business Days, once they've shipped it to us.
This book cannot be returned. Make sure what you're ordering is exactly what you want.
Published: Routledge - December 13th, 2002

Drawing on interviews with the black survivors of Nazi concentration camps and archival research in North America, Europe, and Africa, this book documents and analyzes the meaning of Nazism's racial policies towards people of African descent, specifically those born in Germany, England, France, the United States, and Africa, and the impact of that legacy on contemporary race relations in German

Lusane has created a groundbreaking analysis of the intersection of racial politics and American foreign policy. This insightful work critically examines the roles played by former Secretary of State Colin Powell and current Secretary of State (and former National Security Advisor) Condoleezza Rice in the construction of U.S.