Presenting the first in-person event live at the Raven in more than two years! Kansas memoirist and friend of the store Chloé Cooper Jones will launch her much-anticipated new memoir EASY BEAUTY right here at the Raven in front of a live audience!

Masks and proof of Covid-19 vaccination are required! Capacity is limited so plan to arrive early! 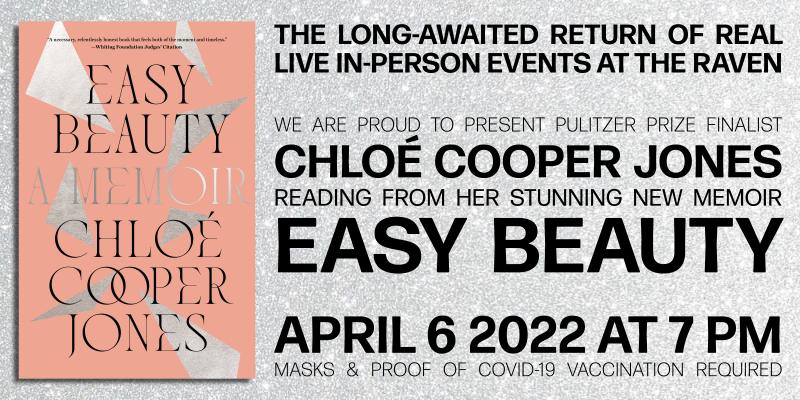 Preorder from the Raven and get a signed copy with exclusive artwork!

From Chloé Cooper Jones—Pulitzer Prize finalist, philosophy professor, Whiting Creative Nonfiction Grant recipient—a groundbreaking memoir about disability, motherhood, and a journey to far-flung places in search of a new way of seeing and being seen.

“I am in a bar in Brooklyn, listening to two men, my friends, discuss whether my life is worth living.”

So begins Chloé Cooper Jones’s bold, revealing account of moving through the world in a body that looks different than most. Jones learned early on to factor “pain calculations” into every plan, every situation. Born with a rare congenital condition called sacral agenesis which affects both her stature and gait, her pain is physical. But there is also the pain of being judged and pitied for her appearance, of being dismissed as “less than.” The way she has been seen—or not seen—has informed her lens on the world her entire life. She resisted this reality by excelling academically and retreating to “the neutral room in her mind” until it passed. But after unexpectedly becoming a mother (in violation of unspoken social taboos about the disabled body), something in her shifts, and Jones sets off on a journey across the globe, reclaiming the spaces she’d been denied, and denied herself.

From the bars and domestic spaces of her life in Brooklyn to sculpture gardens in Rome; from film festivals in Utah to a Beyoncé concert in Milan; from a tennis tournament in California to the Killing Fields of Phnom Penh, Jones weaves memory, observation, experience, and aesthetic philosophy to probe the myths underlying our standards of beauty and desirability, and interrogates her own complicity in upholding those myths.

With its emotional depth, its prodigious, spiky intelligence, its passion and humor, Easy Beauty is the rare memoir that has the power to make you see the world, and your place in it, with new eyes.

Chloé Cooper Jones is a philosophy professor and freelance journalist who was a finalist for a 2020 Pulitzer Prize in Feature Writing. Her work has appeared in publications including GQ, The Verge, VICE, Bookforum, New York magazine, and The Believer, and has been selected for both The Best American Travel Writing and The Best American Sports Writing. She lives in Brooklyn, New York.