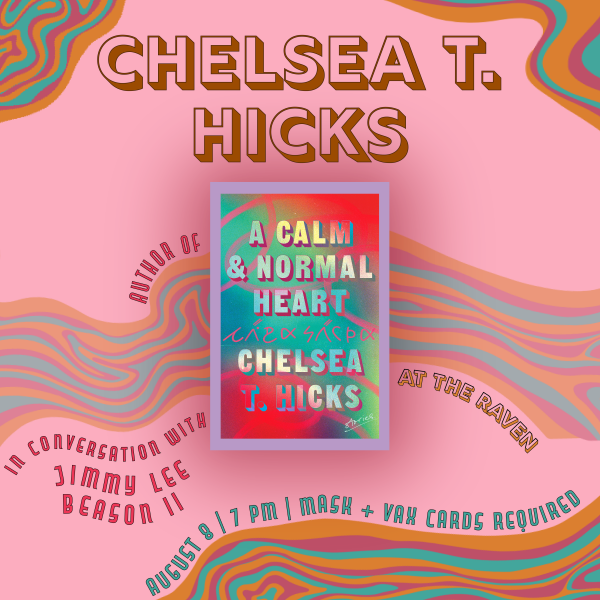 “Unabashedly contemporary, A Calm and Normal Heart documents and channels messy, sexy, people dealing and not dealing with the complex reverberations of our American past in a relentless now. Hicks never shies from the restlessness of racial, sexual, and cultural identity; she embraces her characters’ fragility and obstinacy with an unbound language that is as savvy as it is openhearted.”
—Lucy Corin, author of The Swank Hotel

Get ready for a reading that will embrace what Lucy Corin calls the messy and the sexy, the fragile and the obstinate! On August 8 at 7 p.m., Chelsea T. Hicks will visit the Raven as part of her Ancestral Land Tour to read from and sign her book, A Calm & Normal Heart, a short story collection that puts Native women in the spotlight. Hicks will be in conversation with Jimmy Lee Beason II, a professor in the Indigenous Studies department at Haskell Indian Nations University. We look forward to a rich discussion about how Hicks navigates space and belonging in writing, her journey with rematriation, and the diasporic experience of young, Native people in literature. 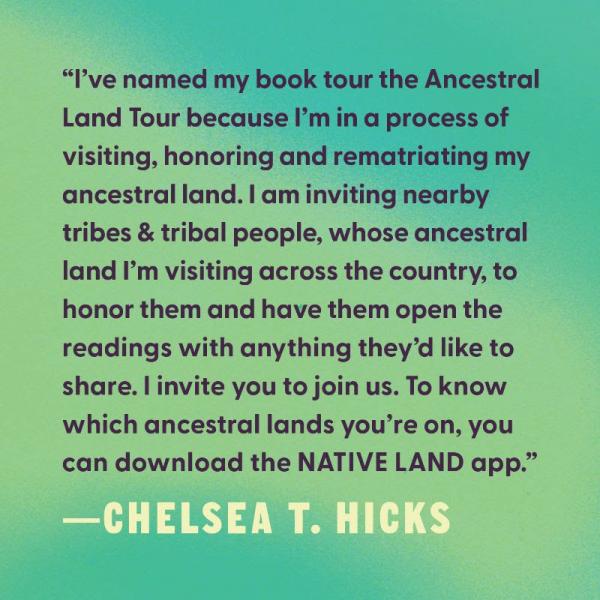 The Raven Book Store occupies the land of the Kiikaapoi (Kickapoo), Kaw/Kansa, Osage, and Očhéthi Šakówiŋ tribes. To learn what ancestral lands you're on, go to Native-Land.ca

From Oklahoma to California, the heroes of A Calm & Normal Heart are modern-day adventurers—seeking out new places to call their own inside a nation to which they do not entirely belong. A member of the Osage tribe, author Chelsea T. Hicks’ stories are compelled by an overlooked diaspora happening inside America itself: that of young Native people.

In stories like “Superdrunk,” “Tsexope,” and “Wets’a,” iPhone lifestyles co-mingle with ancestral connection, strengthening relationships or pushing people apart, while generational trauma haunts individual paths. Broken partnerships and polyamorous desire signal a fraught era of modern love, even as old ways continue to influence how people assess compatibility. And in “By Alcatraz,” a Native student finds herself alone on campus over Thanksgiving break, seeking out new friendships during a national holiday she does not recognize. Leaping back in time, “A Fresh Start Ruined” inhabits the life of Florence, an Osage woman attempting to hide her origins while social climbing in midcentury Oklahoma. And in “House of RGB” a young professional settles into a new home, intent on claiming her independence after a break-up, even if her ancestors can’t seem to get out of her way.

Whether in between college semesters or jobs, on the road to tribal dances or escaping troubled homes, the characters of A Calm & Normal Heart occupy a complicated and often unreliable terrain. Chelsea T. Hicks brings sharp humor, sprawling imagination, and a profound connection to Native experience in a collection that will subvert long-held assumptions for many readers, and inspire hope along the way.

Chelsea T. Hicks' writing has been published in the LA Review of Books, The Paris Review, McSweeney's, the Believer, The Audacity, Yellow Medicine Review, Indian Country Today and elsewhere. She is an incoming Tulsa Artist Fellow and a recent graduate from the MFA program in creative writing at the Institute of American Indian Arts. She is a 2016 Wah-Zha-Zhi Woman Artist featured by the Osage Nation Museum, a 2016 and 2017 Writing By Writers Fellow, and a 2020 finalist for the Eliza So Fellowship for Native American women writers. She is an enrolled citizen of the Osage Nation and she belongs to Pawhuska District.

About the Guest Speaker

Jimmy Lee Beason II is from the Osage Nation and is a professor in the Indigenous Studies department at Haskell Indian Nations University in Lawrence, KS. He is a writer who advocates for decolonization and Native empowerment. Beason is also the author of Native Americans in History: A History Book for Kids.

Native Americans in History: Powerful stories of influential Native Americans—for kids ages 8 to 12. From every background and tribal nation, native people are a vital part of history. This collection of biographies for kids explores 15 Native Americans and some of the incredible things they achieved. Kids will explore the ways each of these people used their talents and beliefs to stand up for what’s right and stay true to themselves and their community. This book of Native American history for kids teaches them about: Becoming a leader—Learn how Sitting Bull led with spiritual guidance and a strong will, and how Tecumseh inspired warriors to protect their communities from white American hostility. Staying strong—Discover athletes like Maria Tallchief, who broke barriers in ballet, and Jim Thorpe, who showed the world that a native man could win Olympic gold. Fighting for change—Find out how Deb Haaland and Suzan Harjo use their activism to raise awareness about Native American issues today. Go beyond other books on American history for kids with a closer look at Native Americans who helped change the world.

"Chelsea T. Hicks' deadpan dexterous wit can make you laugh and cry in the space of a heartbeat. A Calm and Normal Heart is the book I've been waiting for-- audacious, tender, and fiercely committed." --Louise Erdrich, author of The Sentence"A Calm & Normal Heart is sharp, sexy, and endlessly surprising.

Native Americans in History: A History Book for Kids (Hardcover)