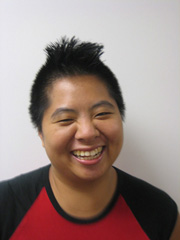 Ching-In Chen is author of The Heart's Traffic and recombinant and co-editor of The Revolution Starts at Home: Confronting Intimate Violence Within Activist Communities. A Kundiman and Lambda Fellow, they serve on Thinking Its Presence: Race, Advocacy, Solidarity in the Arts’s Executive Board and teach at Sam Houston State University.

Adam Mills has had fiction published in FUSION Magazine, Ideomancer, and the Thackery T. Lambshead Cabinet of Curiosities anthology. His book reviews have been published on Los Angeles Review Online and Weird Fiction Review Online, and his interviews with writers such as Daniel Jose Older, William Gibson, and Margaret Atwood can be found on The Rumpus and the KU Commons YouTube channel. Alongside Ann and Jeff VanderMeer, he was nominated for a World Fantasy Award in 2013 for his work editing Weird Fiction Review Online, and has served as managing editor for projects such as The Steampunk User's Manual and The Collected Leena Krohn. He currently works as the Graduate Assistant and Administrative Intern for the Writing Center at the University of Kansas, where he is pursuing a PhD in Creative Writing. He also proudly serves as the speculative fiction specialist for the Raven Book Store. Adam lives in Lawrence, KS with his wife, poet Alyse Bensel, along with two calico cats and two Basset Hound mixes.