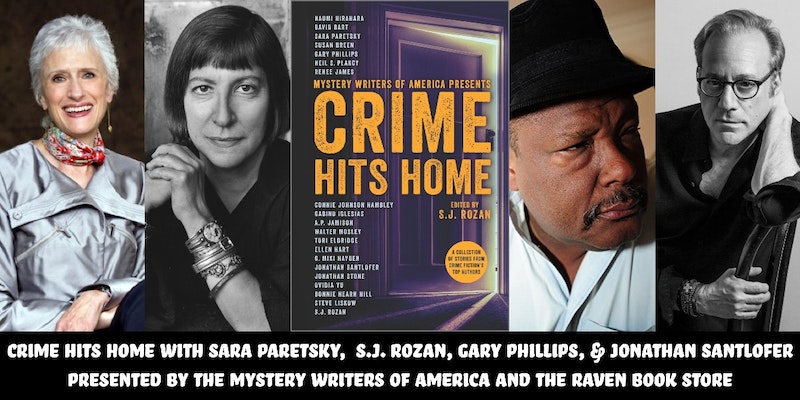 NOTE: this is a virtual event! Click here to register!

The Mystery Writers of America and the Raven Book Store team up to present an all-star virtual event celebrating the new anthology Crime Hits Home. Join us for a thrilling discussion!

The newest anthology from the Mystery Writers of America, which explores the theme of home and the crimes that endanger it, with stories by Ellen Hart, Naomi Hirahara, Walter Mosley, and more.

In this volume, MWA brings together some of today’s biggest crime writers—and some of our most exciting new talents—to consider this question. Each writer has defined home as they see fit: a place, a group, a feeling. The crime can come from without or within. What happens when crime hits home?

Sara Paretsky and her acclaimed PI V.I. Warshawski helped transform the role of women in contemporary crime fiction, beginning with the publication of her first novel, Indemnity Only, in 1982.Sisters in Crime, the advocacy organization she founded in 1986, has supported a new generation of crime writers. She has published twenty-three novels, two collections of short stories, and edited a number of anthologies. Her memoir, Writing in an Age of Silence, was a finalist for the National Book Critics Circle award.Among other awards, Paretsky holds the Cartier Diamond Dagger, MWA’s Grand Master and Ms. Magazine’s Woman of the Year. Paretsky is vain about the quality of her cappuccinos. Visit her at saraparetsky.com

Gary Phillips is the son of a mechanic and a librarian.He’s published novels, comics, novellas and short stories, worked in TV and edited or co-edited several anthologies including the Anthony-winning The Obama Inheritance: Fifteen Stories of Conspiracy Noir. Phillips was a story editor on Snowfall, an FX show about crack and the CIA in 1980s South Central LA where he grew up. Violent Spring, his debut book of more than a quarter century ago, was named in 2020 one of the essential crime novels of Los Angeles. His latest effort is the retro pulp adventure Matthew Henson and the Ice Temple of Harlem.

S.J. Rozan is the author of seventeen novels and 75+ short stories. Her work has won the Edgar, Anthony, Shamus, Nero and Macavity Awards and the Japanese Maltese Falcon Award. In 2016 she was given the Private Eye Writers of America Life Achievement Award.She has served on the National Boards of MWA and Sisters in Crime and as President of PWA. She edited Bronx Noir, an NAIBA Notable Book of the Year, and co-edited Dark End of the Street.

Jonathan Santlofer is the author of the The Last Mona Lisa and six other novels. His memoir The Widower’s Notebook appeared on over a dozen “best books of 2018” lists. Santlofer is the editor of seven anthologies, including The New York Times Notable Book It Occurs to Me that I Am America. His short stories have appeared in magazines and anthologies. Also an artist, Santlofer’s work is in major private and public collections, including the Metropolitan Museum of Art, the Art Institute of Chicago and Tokyo’s Institute of Contemporary Art.He is the recipient of two National Endowment for the Arts grants, has been a Visiting Artist at the American Academy in Rome, and serves on the board of Yaddo, the oldest arts community in the U.S.He lives in NYC where he is at work on a new novel.